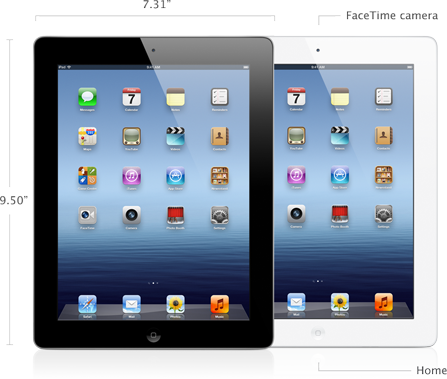 Yesterday Apple released a new iPad and it was just as amazing as everyone thought it would be. First, there is the Retina display that exceeds the resolution of just about every laptop monitor on the market. The memory has been bumped to 1GB. Up from the iPad 2’s 512MB. And the rear camera has been upgraded from the grainy POS it was to a new 5MP sensor with autofocus, face detection, and true HD. The weight has gone up a little by 50grams. And finally the mobile version has an updated radio that now supports LTE.

Of course the iPad wasn’t the only thing Apple presented even though it was what everyone came to see. There was the upgrade of iTunes to 10.6. This new version now supports 1080p videos. And iTunes is furthering the Cloud as the backend with iTunes in the Cloud. Now you can watch your purchased videos on all your devices; no synching necessary.

With the upgrade of the iTunes store comes the upgrade of Apple TV. It’s still the same black puck with a new processor; a single core A5 processor. It’s like the same processor in the iPad 2 just with half the cores. The UI has been upgraded with a wall of buttons interface similar to the Nintendo Wii. You can now sign up and pay for Netflix using your iTunes account (now if it doesn’t do region checking that would be great). The same shitty prices still apply. $2.99 to rent a TV Show and $3.99 for a HD Movie. compared to Netflix it’s a bit pricey.

With the conclusion of MWC just a week and other tablet makers showing off their wares before this event 2012 is looking to be another great year for users, developers, and Apple. Other tablet makers are going to have to do something truly amazing to stay competitive. Adding more cores simply won’t be enough.